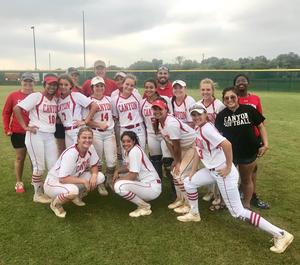 The Canyon High School Cougarettes had fans on the edge of their seats with another state championship run this season. The district and region champions ended the year strong among the top four teams in the state of Texas.

The Canyon High School softball team ended the 2019 year with two championship titles and among the top four teams in the state of Texas, making it to the semifinals in the UIL Class 6A state tournament.

As the District 26-6A and Region IV champions, the Cougarettes finished the regular season with a 27-5 record, losing to Klein Collins in a semifinal game on May 31 in Austin.

“After graduating 10 seniors from the previous season, there were a lot of questions coming into the 2019 season,” said Coach Kevin Randle. “We had some talented young players who learned to work well with our experienced players, and our returning players provided great leadership on and off the field as they helped the team come together to achieve common goals.”

This was the third year in a row for the CHS softball team to win the district title, and the fourth time in five years. In fact, the Cougarettes have advanced to the regional finals in nine of the last 11 years with four trips to the state tournament, winning the state championship in 2009.

Graduating seniors, Aliyah Pritchett and Sydney Belvin are both continuing their softball careers with plans to play at the collegiate level. Pritchett will play at Baylor University on a softball scholarship while Belvin will play for McNeese State University in Lake Charles, Louisiana on a scholarship.