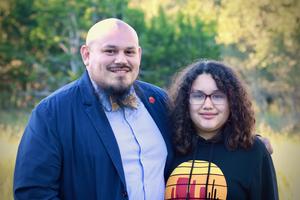 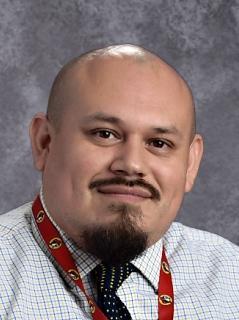 A second-year teacher who spent his first career in the military was honored on the radio last week for his dedication in the classroom. The cherry on top though was learning that his daughter nominated him.

In his second year as an educator, Church Hill Middle School Teacher Juan Carlos Vasquez was surprised when he learned that he was the Y100 Feature Teacher of the Week on Sept. 23. To top it off, his 14-year-old daughter, Julia, nominated him.

Vasquez was honored on the Y100 radio station’s Beth & Big Joe Morning Show and received a $100 gift card to Chicken N Pickle, an indoor/outdoor restaurant with pickleball courts. The show has been honoring a local teacher weekly. Julia knew that her father was the perfect nominee.

“I nominated my dad because he is a good teacher who shows how much he cares about his students,” Julia said. “He jokes around with his class, a lot.”

The former United States Army sergeant who served six and half years, including three combat tours, became a teacher to make a difference, and he is doing just that. He starts class with “positives,” as he calls them, giving students a few minutes to mention anything positive that has happened to them since the last time they saw each other.

“I love being a teacher,” said Vasquez, who was medically retired and honorably discharged after being seriously wounded in Afghanistan. “Every day is a day where we can impact someone’s life. How many people can say that? I would not be in the classroom if I didn’t absolutely believe that I was making a difference.

“I decided to become an educator because I found that education is the greatest equalizer this world has to offer.”

CALP allows students who were enrolled in an elementary dual language program or Spanish immersion program to continue second language learning in Spanish at the middle school level. Comal ISD offers CALP at both CHMS and Spring Branch Middle School.

Church Hill Middle School Teacher Juan Carlos was named Y100 Teacher of the Week on Sept. 23, thanks to his 14-year-old daughter Julia, who nominated him. (Photo by Chelsea Ormond)